The PVG Ltd process is pretty comprehensive. We had been interested in a photovoltaic electricity generation system for the house for a while and contacted several companies.

Only PVG were willing to visit the extremities of West Cork without any charge (excuse the pun). A lovely young man arrived and gave an entry level description of the system giving a straightforward description of likely level of costs and benefits without the slightest whiff of hard selling.

We confirmed interest and next we had a visit from head honcho  Joe Garvan who surveyed the site and advised us exactly which forms of equipment we needed and where they should be located – some panels facing south and others roof mounted facing east  and west to achieve continuity of charge. We discussed different panel and battery  producing companies and PVGLtd was willing to supply any make we wanted.

After reading internet performance information about various companies we were happy to take Joe’s advice as to the manufacturer of panels and battery which they used.

The installation team consists of electricians and panel installers. Everyone seems to be called Joe or Mark apart from Slaven the delightful Serb electrician. They tidied up at the end of each day’s work and on completion of the link up to the grid, Slaven gave us a walk through of the system, displaying the patience of a saint for a class whose school physics was very rusty indeed. 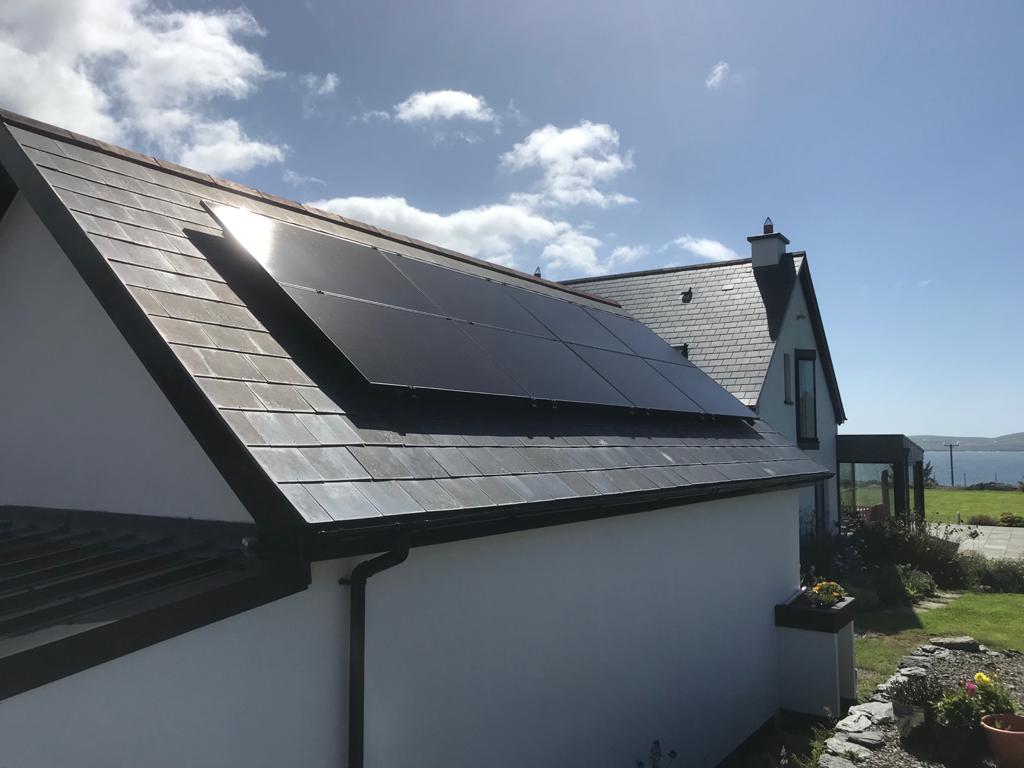 We were looking to the system to reduce our electricity bills. We have geothermal underfloor house and hot water heating upstairs and down which is quite charge hungry especially in the winter.

We liked the idea of a battery which could charge during the day when the sun shines and allow us to run washing machines and dishwashers at night. It’s early days and we are in summer but the equipment gives live readings of electricity generation and even on a drizzly overcast day the charge keeps ticking over. It’s also possible to monitor generation over the day, week or month.

The fact that the whole process is silent is a great benefit and one of the reasons we ruled out wind power generation.

We are looking forward to seeing electricity bills drastically reduced in the winter period.

The estimates of generation we were given seem accurate so far, even on a very cloudy day. Although daylight hours are obviously shorter we expect substantial power input from the system during the winter months and we look forward to making before and after comparison of electricity bills.

I would certainly recommend PV power generation as a matter of principle.

I would also recommend PVGLtd to install it because they are straightforward, friendly and efficient.

Any cookies that may not be particularly necessary for the website to function and is used specifically to collect user personal data via analytics, ads, other embedded contents are termed as non-necessary cookies. It is mandatory to procure user consent prior to running these cookies on your website.